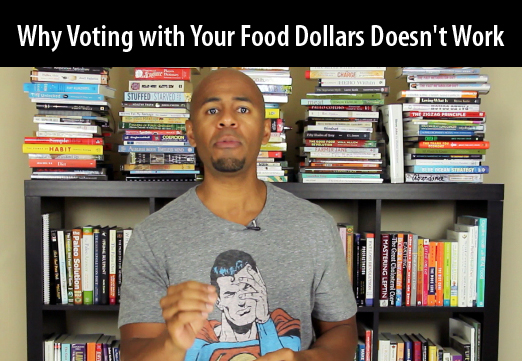 Vote with your food dollars.

With activism at its core and clear purpose in its actions, this frequently heard foodie maxim has become the battle cry for those of us demanding change in our food system.

On its face, food dollar voting is intended to support those who do it the right way — the farmers who rotate their crops, protect the integrity of their soils, feed their animals their proper diets, and provide their customers, you and me, with real organic produce and pastured meats and eggs.

It just feels so warm and fuzzy. Sustainable, too.

But on the flip side of all of that warmth and fuzziness are the ones who come out on the short end of our votes — the farmers who do it the wrong way.

To hell with them, you might say. They raise monocrops. They erode their soils with harsh chemicals and tillage. They confine their animals, feeding them grains and antibiotics. And then they have the nerve to sell their sick foods to paying customers in the name of health.

The prevailing consumer solution for the horrendous stewardship of conventional farmers has been to take money out of their pockets by casting fiscal votes for the good guys, the ones who do it right. Then at some point, the ones who do it wrong will get the message and change their ways.

If it were only that simple.

The foodie electoral system is broken. This concept of voting with our food dollars is one on par with the “calories in, calories out” slogan of the fitness world — a half truth with sparse results and a laundry list of side effects.

Don’t get me wrong, I’m all in favor of supporting local organic farms. However, my food purchases are made with the intention of keeping real farmers in business, not driving conventional farmers out.

No one benefits from farmers gone bankrupt.

Here’s where I’m coming from. While our foodie hearts are in the right place, our minds are living on Fantasy Farm, a place where conventional farmers listen to their customer’s demands, resolve to become better stewards of the land, and then convert all things conventional and synthetic into organic and eco-friendly by twinkling their collective noses.

It doesn’t work that way.

The reality is that even if a “wrong way” farmer felt compelled to take the leap, make the conversion, and raise animals and crops on an organic mixed farm, he’d most likely soon find his feet planted firmly on his eroded soil, weighted down by the time, money, and knowledge it takes to get off the ground.

Here are just a handful of the obstacles conventional farmers face…

Debt and the Coming Bust.

Farming is a boom and bust industry. Currently in a boom due to overseas demand, ethanol production, and soaring farmland prices, conventional farmers who grow commodity drops like corn, wheat, and soy are very much aware that the good times won’t keep on rolling forever.

In fact, the Department of Agriculture has predicted that in 2014 farmers can expect a 25 percent drop in income due to a speculated reduction in commodity prices.

As we all know, a slump in income combined with rising debt is never a good thing.

According to this article, farmer debt has risen almost a third since 2007, much of it due to borrowing against the value of farmland.

Farmers who have been in the game for some time will recall the bust of the 1980s, when they saw their land values decline by 27 percent, leading to the highest annual farm bankruptcy rate ever recorded, according to the USDA.

The bottom line: With what appears on the horizon, no farmer in his right mind would gamble his or her future to convert to organic — a conversion that requires the purchase of new equipment for soil-friendly tilling, the cost of intensive manual labor, and….well, animals.

Probably not a savvy business move at this time.

If a farmer declared today to be the last time he would ever apply synthetic, chemical inputs onto his land, his crops could not be called organic until August 3, 2016.

This 36 month period is known as the transition period.

During this transition, improving soil structure and nutrition typically calls for the removal of high value crops like vegetables, replacing them with grains and legumes.

And of course, organic conversion comes with a price.

On a happier note, financial assistance is available to those who qualify.

The farming practices of conventional versus organic are like night and day.

The days of controlling weeds and pests with chemicals are over. Instead, one must learn which beneficial insects and bugs control for pests, how to eliminate specific weed species without toxins, the nutritional needs of a diversity of crops, the intricacies of tilling without contributing to soil erosion, how to move efficiently move and graze cattle…

The list is endless, as is the process of learning these new techniques — through books, journals, seminars, and mentorships — as well as teaching them to farmhands.

A recent survey found that transition costs were estimated at over $50,000 (Canadian dollars) per farm, but this will vary depending on the length of the transition period (which may be phased in over several years), the current products being produced and the available buildings and equipment. [Source]

Chances are that many well-meaning conventional farmers — the ones who wish to join the ranks of the organic and humane — simply cannot weather the expense, mounting debt, and uncertainty attached to the demands of a foodie electorate whose votes empower those farmers who are already doing, while stifling the ones who wish to do.

To create change, money needs to go into these conventional farms, not come out. As backward as it may sound, it’s the truth. The discernible hitch is in identifying which farms to invest in. And how.

How can we support these farms, keeping them above water during the period of transition and beyond?

My own personal solution is to start a non-profit foodie-funded subsidy program that provides financial, educational, and voluntary labor support for transitioning farmers.

With more organic farms comes healthier soils — soils that take in carbon from the atmosphere, reduce water runoff and flooding, and of course, produce nutritious crops.

And with more organic food production comes lower prices, so less complaints about the cost of buying organic.

Though a very raw idea at the moment — I just came up with it in the shower a few days ago — I feel like such a program would support change in our food system.

It’s not about voting with our food dollars, but rather supporting with our dollars — pulling farmers up, not pushing them down.

At least that’s how I see it.

Or, maybe I’m the one living on Fantasy Farm.

With the above in mind, how effective is our current “voting with your food dollars” strategy in truly altering the real food landscape?

What solutions do you have for supporting transitioning farms?

Leave a comment below and let me know your thoughts!

This entry was posted on Friday, August 2nd, 2013 at 7:46 am and is filed under experts. You can follow any responses to this entry through the RSS 2.0 feed.

11 thoughts on “Why Voting with Your Food Dollars Doesn’t Work.”