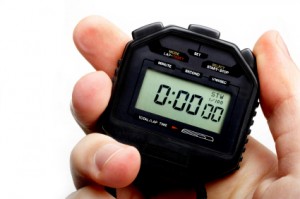 More Bang for Your Buck: Interval Training
by Austin Robinson

Not everyone has time to mosey along on cardio equipment at the local gym for an hour everyday. Aside from that, recent research has shown that up to 4.5 hours a week of moderate exercise may not be enough to produce significant weight loss! (1,2) For those of us who want results and want them fast, intervals may be the way to go.

Interval training has been around for decades (3). However it has become extremely popular in the fitness world only recently. Interval training is often referred to as High Intensity Interval Training or HIIT. HIIT is now commonly recommended in the fat loss and conditioning industry. However, beginners may want to start with moderate intensity interval training. Jumping right into HIIT maybe too demanding for some folks. So what exactly is it?

Interval training is actually pretty self-explanatory. The exerciser works in brief to moderate bouts at a high intensity interspersed with either active recovery or just plain gasping for air. Active recovery would include a relatively low intensity movement such as jumping jacks or a slow jog. Two methods are commonly used to perform interval training, work-to-rest ratios or the heart rate method.

Using a work to rest ratio is cost effective and convenient. The exerciser can set an arbitrary ratio such as 30-second sprints followed by 45 seconds active recovery. The heart method may be a bit more objective, but also requires the use of a heart rate monitor or quite a bit of calculating on the part of the exerciser. This method does however give us a more accurate look at what’s going on inside. For example, someone may exercise at 165 beats per minute (bpm) for one- minute intervals and have the rest period set to whatever time it takes to get back to 120 bpm, so it may vary from interval to interval. With everyone’s heart rate response being unique some coaches recommend setting a maximum rest time however, to avoid too long of a rest period. So now that we have established the background and methodology, why perform intervals?

Several studies have shown that interval training may be more effective for weight loss and health markers such blood glucose than traditional rhythmic cardio, as well as improving athletic performance by raising exercise capacity. (4,5) Doing bursts of strenuous exercise not only improves cardio respiratory fitness but also the body’s ability to burn fat as well. This increased fat “burning” persists even during low- or moderate-intensity workouts. On top of all these other benefits, these adaptations have been shown to start to occur in as little as 2 weeks! (5) A lot of the protocols used by researcher have involved protocols such as 4-7 “all out” 30-second sprints on stationary bikes interspersed by 3-5 minute rest periods known as the “Wingate” method. Another popular method is referred to as the “Tabata” method coined after the researcher who used the protocol. It consists of 8 20-second max effort exercise bouts spaced by only 10 seconds of rest! This is only for the well conditioned. As you can make out, these exercise protocols take much less time than traditional cardio, and appear to be more effective.

* Overweight and/or less fit exercisers should avoid high impact intervals such as sprints or stairs. Use stationary bikes or movements like thrusters.

* Due to the intensity of the exercise, most fitness professionals agree that intervals shouldn’t be performed daily, I would recommend 3X per week interspersed between weight training days.
The stress that this exercise evokes on the cardiovascular system may be too high for those at risk for CVD. MIIT may be more appropriate for these folks.

This entry was posted on Tuesday, November 2nd, 2010 at 10:26 am and is filed under fit. You can follow any responses to this entry through the RSS 2.0 feed.