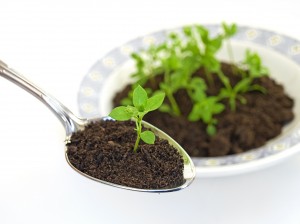 Just wash it off.

Sometimes the simplest answer can be the correct one, especially in times of gross incertitude when contradictory information calls everything into question.

Factor in the emotional charge of scam artists tugging at our wallets and pursestrings, and the majority will resolve to not be the suckers. To wash their hands of it all.

Meanwhile, an ever so small segment of the minority opts to dig through the dirt for the real answers, probing beyond the bought-and-paid-for research and the front page media reports that transmit these faux scientific findings to the masses.

Example. Around this time last year, one such headline was all the buzz in just about every newsroom, kitchen, and produce aisle across the land.

The verdict had been handed down. Not by a jury of our peers, but by highly intelligent PhDs in lab coats. Game over.

The majority rejoiced en masse, whooping a collective “I told you so!” across social media feeds.

Organic and non-organic (a.k.a. conventional) foods were deemed separate but equal — separated by stock keeping units and, of course, a palpable cost chasm, but equal in nutritional value. So they said.

The Stanford review, however, came with one caveat that certainly did not go unnoticed by conventional produce consumers.

Quoting this article published on the Stanford Medicine website, “…researchers found that organic produce had a 30 percent lower risk of pesticide contamination than conventional fruits and vegetables, [though] organic foods are not necessarily 100 percent free of pesticides.”

The solution seemed simple: If there’s pesticide on your produce, just wash it off.

If it were only that easy.

The truth about organic food goes well beneath the skins of our fruits and vegetables. While we sling dirt about nutritional value, our attention is drawn away from the deeper issues lying at the roots of the food debate.

Ironically, these very same issues — climate change, rising sea levels, endangered species, and clean water — are the ones guiding our decisions to bring our own bags to the supermarket, to feel ashamed when we don’t use the recycle bins, and to downsize our SUVs for electric or hybrid cars.

The story that is not being told is one that lends credence to the fact that our food buying decisions wield far more eco-power than many of us ever thought.

The cast of characters in this story are a bunch of D-listers (D for dirt, get it?) — so inconspicuous that there are probably about a trillion of them stuck to the bottoms of your shoes, so tiny that a million or so can fit on the period at the end of this sentence. They don’t wear lab coats. Nor do are the looking to sell you anything.

We can’t survive without them. But we know little about them.

And only by getting to know them will we ever elude the misinformation machine that governs what we think and how we decide when it comes to the foods we eat.

My initiation into the world of eco-consciousness happened while sitting all alone in a movie theater.

I remember Al Gore scaring the crap out of me with his rather compelling slideshow of maps, curves, polar bears, and melting ice caps.

The take-home message: Lower Carbon Emissions, or Else!

I’m no fan of scorching hot weather or my San Diego home becoming part of the Pacific Ocean, so I eventually traded in my gas guzzler for a fuel-friendlier vehicle and did my best to Go Green. Doing my part to heal the world.

Lowering our carbon footprints became all the rage. However, Former Vice President Gore unfortunately glossed over one hugely important topic, the role of soil (yeah, dirt) and conventional farming practices in our carbon predicament.

Writes Judith D. Schwartz in her book Cows Save the Planet…and Other Improbable Ways of Restoring Soil to Heal the Earth,

“When you hear reports of rising carbon dioxide levels, it’s easy to get the impression that the carbon-and-oxygen molecule is a kind of toxin, some alien vapor coughed up by a century-plus of rampant industrialism that has now come back to haunt us. But the trouble isn’t the carbon itself; it’s that there’s too much in the air rather than in the ground, where it lends to fertility to the soil. Soil, as it turns out, is the natural and the most cost-effective carbon sink.”

In other words, when soil is properly managed, allowing for ample photosynthesis and minimal oxidation (more on this later), carbon is drawn out of the atmosphere and held underground, where it carries out its critical functions.

Schwartz goes on, “[Distinguished University Professor] Rattan Lal, of Ohio State University, has estimated that globally soil carbon restoration can potentially store about one billion tons of atmospheric carbon a year. This means that soil could offset about one-third of the human-generated emissions annually absorbed in the atmosphere.”

Needless to say, getting carbon into the soil is key. But what exactly ferries carbon underground and what does it do once it gets there?

Before we go underground, let’s first look up to the sun.

If you turn back the clock to seventh grade science class, you may recall the week you spent in awe of photosynthesis, the process by which plants use sunlight to split carbon dioxide and water to produce energy (read: carbon-containing organic matter) while exhaling oxygen.

Photosynthesis in reverse — called oxidation — converts carbon compounds back into carbon dioxide, water, and energy, releasing them back into the atmosphere, thus increasing CO2 levels and removing moisture from the soil.

So we want more photosynthesis and less oxidation. If you’ve ever visited or driven by a conventional farm, you may have noticed plenty of bare soil where no crops are growing. In fact, these fields can lie fallow for many months between harvests.

Bare soil is chlorophyll-free, meaning it is also photosynthesis-free. In other words, CO2 cannot be taken out of the atmosphere in a place where there are no leaves. And where these are no leaves, oxidation reigns supreme, pushing carbon out of the soil and into the air.

Add to this the fact that for every 1% loss of soil carbon, a single acre of land loses the capacity to store 60,000 gallons of water. This is how floods happens.

This is the eco-unfriendly state of the many conventional farms growing monocultures, completely lacking biodiversity on their land and leaving their soils bare for months at a time.

This is what we support when we buy conventional foods.

A single teaspoon of what we call dirt contains about 50 billion living microbes — bacteria, yeast, fungi, protozoa, nematodes, and more — all acting out their roles as the support cast responsible for the health of the soil, plants, and planet at large.

Although most of us would assume that plants simply suck nutrition from the soil without giving anything in return, the truth is that plants are intended to coexist with microbes, scratching each other’s back in the name of optimal performance and survival.

Take, for example, the crucial trade agreement between plants and fungi. Mycorrhizal fungi (or “root fungus”) cannot run on any other form of energy but dissolved organic carbon. To obtain its energy source, it takes part in an underground barter scheme, providing essential nutrients to plants in exchange for liquid carbon fuel.

Plants could not have picked a better partner to trade with, as the mycorrhizal fungi have the remarkable ability to grab nutrients and water from distant locations by using their long, threadlike filaments called hyphae. (Think of Plastic Man and his super-strechy limbs.) These hyphae also contain a sticky substance called glomulin — or “soil’s superglue” — which can hold onto carbon, literally storing it for decades. It is glomulin that maintains the soil’s crumb-like structure, inhibiting erosion and allowing for air and water flow.

This barter exchange is one that works for all sides. Both parties are nourished, and the plant can feel secure that with a strong team of mycorrhizal fungi at its roots it will have healthy carbon-rich soil to grow in while remaining resistant to drought and disease.

It doesn’t end there.

The liquid carbon buffet provided to the fungi also feeds and energizes the soil microbes responsible for breaking down mineral particles and making them available to plants in a form they can use. This is where the minerals in our foods come from.

Not a bad deal.

Sometimes a sweet deal can fall apart. However, in this case, the breakdown is by no fault of the parties involved, but by dreadful land stewardship.

First, let’s consider the bare soil issue discussed above. Soils left without plant cover are losing carbon, thus starving the mycorrhizal fungi of their primary fuel source. When the fungi are underfed, so too are the microorganisms and plants. As a result, plants are more prone to disease, soil loses moisture, and the food we eat is less nutritious. (Despite what flawed studies may say.)

Let’s also consider the common conventional farming practice of tilling the soil and how it affects the fungi’s nutrient-grabbing hyphae. Turning over topsoil with shovels and machinery severs these tendrils, impairing the fungi’s ability to locate nutrients to meet its end of the barter.

Lastly, the use of fertilizers containing synthetic nitrogen on conventional farmland, as well as the application of FUNGIcides reduces the population of mycorrhizal fungi.

Says soil ecologist Christine Jones, “[When fungicides are used], carbon flow will be stopped before it even starts.”

Although not so cute and cuddly, mycorrhizal fungi and beneficial soil microbes deserve as much saving as the polar bears.

I can go on for many more pages describing how conventional farming negatively impacts soil biology, warms the climate, and contributes to desertification, droughts, and flooding.

To be honest, for the sake of brevity I left a lot of points out, including humus production, plant fertility, nitrogen saturation, acidity and salinity, the water cycle, deforestation, biotic pumps, and more. But this blog post is getting kinda long. We’ll have to cover that stuff on another day.

My point is that there is more to the organic versus non-organic debate than nutritional value alone. The rabbit hole goes much deeper than that. And it can get pretty complicated, I must admit.

I’m having a hard enough time piecing it together myself…

But if there’s one thing I know for sure after spending the past month studying farming and soil biology, it’s that the food choices we make have a profound impact on the planet and its future.

If you’re buying conventional, you can’t just wash that kind of impact off.

Wanna learn more? Click the player below to listen to my interview with Judith D. Schwartz, author of Cows Save the Planet!

This entry was posted on Thursday, August 15th, 2013 at 7:40 am and is filed under wellness. You can follow any responses to this entry through the RSS 2.0 feed.

5 thoughts on “The D-List: The Dirty Truth About Non-Organic Food.”