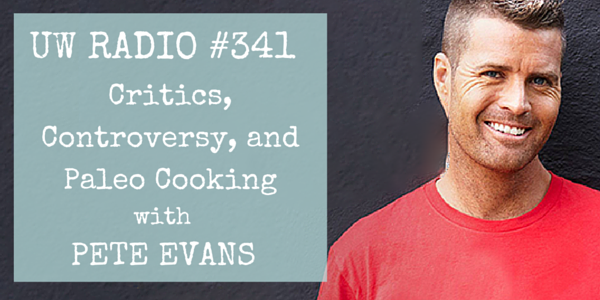 I’ve been on quite the Facebook tear these past couple days, airing my thoughts about where my head is at right now.

I think somewhere during my 6-week hiatus from the podcast this summer, I started questioning the way I had been doing things … wondering if the podcast and newsletter were doing more harm than good.

It kinda reminds me of way back in 2011 when I got fed up with foodie bloggers beefing with other foodie bloggers and I wrote this blog post about Just Eating Real Food.

Does being healthy really have to be this complicated?

Should we just accept every charismatic health expert’s word as gospel and shut out all opposing views?

Is letting someone else decide what’s right for you and me really the path we want to take?

Or might we be better off considering all sides, listening to our own bodies and intuitions, and deciding what makes sense for who we are and where we are in our lives.

I had the pleasure of interviewing my friend Kevin Gianni, author of the new book Kale and Coffee, last week.

As a couple of guys who have been in the health space since 2006/2007 — when we started our YouTube channels — he and I had a candid conversation about how we’ve evolved in this space.

Kevin started his journey as an orthorexic, raw vegan who obsessed over his next “hit” of organic, raw food.

Though he was a health expert with a huge following, he was also underweight, irritable, and “hangry”.

Now in 2015, he eats meat, is admittedly a bit overweight, and is MUCH happier. The focus of his book is how to be healthy and happy, without going off the deep end.

To be healthy but realistic — something I think we should all aspire to be.

Here’s a quote from Kevin’s book:

“The reason we’re so confused about our own health is that the stories we’ve been told are a series of cuts, edits, and rewrites by the media, health gurus, companies, medical doctors, and researchers — in some cases, by total nutcases. And with all these fabrications, what has been lost is the essence of what great health really is and how to get it.”

Kevin posted almost 1000 YouTube videos before shutting it down. Including my summit events, I’ve conducted about 500 interviews. And at some point along the way you start to find gaping holes in arguments, overwhelming complexities when simplicity would be the better path, and, as Kevin mentioned, a few nutcases.

I think all internet health personalities (the ones who really care) go through a phase when they start to question whether they’re doing more harm than good. Whether they’re actually helping people or turning them into obsessed worrywarts who can’t eat a meal without feeling anxious.

That’s where I’m at right now.

So if my posts and podcasts are sounding more skeptical and ornery lately, that’s why.

I don’t mean to offend any health experts. But I feel like an expert who really knows their stuff and is open-minded and realistic about how they go about their message will welcome some skepticism.

And it is also my hope that the listeners will welcome the skepticism and understand that there are many sides to a story. For many of us, the conclusion is simpler than we ever imagined.

Here’s another quote from Kevin’s book. This one is regarding what he eventually came to believe about diet…

“What a boring conclusion. It’s so basic. I almost feel duped. I was taught that a healthy diet is so much more than it really needs to be. And I actually suffered because of what I learned.”

Implement the basics before digging deeper.

Only work with open-minded practitioners.

Decide what’s best for YOU.

My episode with Kevin won’t be posted until next Tuesday. But I felt compelled to share that with you today.

Because the podcast is a lot different than it used to be.

Because I’m different than I used to be.

And being the skeptical, keep-it-simple, speak-up-when-I-disagree kind of person I am is what I think best serves you and those who follow the podcast.

Today’s podcast guest has had more than his fair share of skepticism and critics. However, the vitriol he’s come up against is for … eating real food.

Chef Pete Evans, co-star of Australia’s #1 TV show My Kitchen Rules, joined me for Episode #341 of Underground Wellness Radio to discuss WHY the media and dietitians are railing against his Paleo way of eating. Plus, how he’s changing the food climate Down Under while changing lives at the same time.

I’ll be honest, there’s a lot of juicy stuff in this interview. However, I think I could have done a much better job of balancing the negative with the positive. But it is what it is. Lesson learned.

BTW, here’s the link to The Paleo Challenge show Pete and I spoke about.

See ya Friday with a new episode with David Zappasodi, author of Immovable Heart, Unstoppable Mind.

This entry was posted on Wednesday, September 2nd, 2015 at 11:00 am and is filed under kitchen, podcast, wellness. You can follow any responses to this entry through the RSS 2.0 feed.