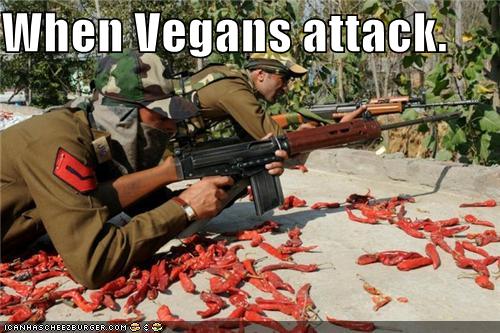 Part of me thinks I should just leave this one alone.

But how can I resist?

Yesterday, I woke up to find a Facebook update from low-carb blogger Jimmy Moore regarding a YouTube video posted by a fruitarian “health guru” to remain nameless.

The objective of this 20-minute video, which based on my experience likely took 5-6 hours to put together, was to put as many low-carb/Paleo bloggers, researchers, and writers on blast (that’s slang for calling someone out in front of a group of people) for their appearances and inconsistencies. In other words, it was a 20-minute shit-talking session bordering on immaturity and self-righteousness. Pardon my French.

Now, I’ll be honest. The man brought up some very good points, things that even cross my mind every now and then. For instance, I too wonder why so many low-carb leaders and advocates don’t quite appear the part. If fat storage is all about controlling blood sugar and insulin, then what’s up with the double chin and spare tire around your waist?

I understand that everyone’s journey is different, as Jimmy Moore pointed out in his fantastic blog Why So Many Low-Carb Representatives Tend to be on the Heavier Side. And I understand that there a lot of low-carbers who were once hundreds of pounds heavier before changing their diets and they may have not yet reached their goal weights.

But this can’t be everyone’s story!

I’ll be honest, I’ve thought twice about having a few guests on my radio show because the topic was fat loss and the guest was borderline obese. Credibility shot!

Keep it real. When you’re at the gym and you see an overweight personal trainer with an overweight client, you begin to wonder. I know I’m not alone on this one! I worked in a gym for eight years. Members talk.

But again, everyone has his or her own journey. Who are we to judge based on appearance alone?

Actually, who are we to judge period?

But I do agree that more lean, fit low-carb/Paleo peeps need to step up and make themselves heard if this movement is ever going to go as mainstream as we’d like it to go. People need proof. In my opinion, vegan leaders seem to have more of the physical proof that people are looking for.

NO, I’m NOT saying that all of us need to be fitness models! But the muffin tops and man boobs definitely aren’t helping our cause here.

Hmm..something tells me that a lot of readers are going to misinterpret those last few paragraphs. If you’re offended, just remember that it means what you make it mean.

As usual, he cherry-picked his “overweight low-carb/Paleo” pictures and left out guys like Robb Wolf, Mark Sisson, Art Devany, and myself, who can certainly get our Chippendale on if we really wanted to. He even went so far as to leave a comment (posted below) accusing Mark of using HGH and Art of using steroids. This is utterly ridiculous and defamatory, in my opinion. It’s as if all fit meat eaters over 50 are juicing (and not the kind with the fruits and veggies). 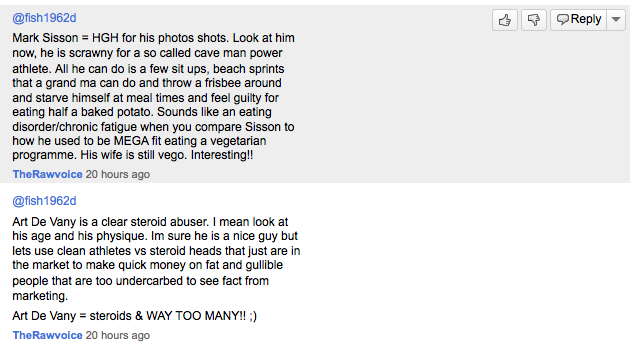 That’s “shaking my head” for the internet acronym challenged.

Equally annoying, he included pics of vegan athletes, world record holders, and other vegan leaders with great physiques. This was awesome to see! It’s great to see evidence of people physically thriving on vegan diets. Good for you guys!

Like I always say, there are different dietary solutions for different people. Not all vegans have health problems. Nor do all meat eaters. There’s a lot more to it than what kind of diet we choose to consume.

The most unfortunate part of all of this is that people actually follow and respect this guy. This is exactly the kind of “guru” Mike, Kevin, and I warned everyone about during the Great Health Debate. This is what happens when the subject of what we put into our mouths becomes less about nutrition and begins to resemble fundamentalism. It’s an unhealthy outlook disguised as health promotion. The two couldn’t clash more.

I thought about posting the video here, but I’d rather not send any traffic this guy’s way. I left a hint somewhere in this blog, though. It’s not hard to find.

If you do find it, set an example and be respectful. Consider it an example of how NOT to be a leader.

Then again, maybe he was just having a bad day and needed to vent. All of us go a little bananas from time to time. 🙂

This entry was posted on Tuesday, February 22nd, 2011 at 12:23 pm and is filed under wellness. You can follow any responses to this entry through the RSS 2.0 feed.

60 thoughts on “When Vegans Attack!”