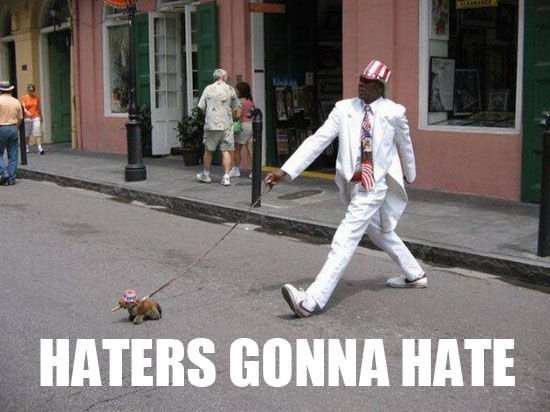 Another of one of life’s certainties is that there will always be people — sometimes even those who are supposed to support you the most — who will do all they can to keep you down. They go out of their way to sabotage your diet and exercise program. They do all they can to tear you away from your significant other. For some reason, they can’t seem to be happy for you no matter what awesomeness may be occurring in your life.

Yet, little do we know that our biggest hater may be, in fact, that three-pound noodle between our ears.

Last night, I decided to pluck one of my favorite books, Life Unlocked: 7 Revolutionary Lessons to Overcome Fear, off the shelf. In it, author Dr. Srini Pillay breaks down the science of fear and why even though we know what we want, we just can’t seem to act on it. We get stuck.

This reminds me of a Facebook status update I posted a couple of months ago, in which I asked my peeps what they would do if they were guaranteed to succeed. The responses were some of the most amazing aspirations I had ever read. Yet, when I later inquired about why they were not pursuing these inspiring endeavors, the almost-unanimous response was fear.

But where does this fear come from?

The human brain is quite the survivalist. Although we have developed higher order functions like speaking, thinking, and, of course, blogging, our brains still possess primitive forces remaining ever-vigilant for signs of danger or threat. It is these latter forces that may lie at the root of what I call the game of start-stop-start-stop-only-to-start-again-and-stop-again when it comes to moving toward our goals.

I detailed my own seven-year battle with the start-and-stop cycle, as it related to completing my e-book, in chapter 10 of The Dark Side of Fat Loss.

Before I go on, I should let you know that what I am about to describe is merely the basics of fear science. If I went any deeper, we’d end up with a really long blog. So, for further reading, I suggest you check out chapter one of Life Unlocked, or at a minimum, listen to THIS INTERVIEW with Dr. Pillay on UW Radio.

At the heart of fear lies an almond-shaped mass of nerve cell bodies, located in the center of the brain, called the amygdala (a-mig-duh-la), a primitive you-better-run-from-that-hungry-lion structure we all inherited from our ancestors. When danger is present, this structure lights up, thus activating our fear circuitry.

To say that the amygdala has an itchy trigger finger would be an understatement. Take for example people who have a condition called cortical blindness, with which there is no damage to the eyes themselves but to the striate cortex, the part of the brain responsible for processing the nerve signals relayed from the eyes. In other words, the eyes work fine, but the brain just can’t make images out of the information, thus the individual can’t “see” anything.

Studies have shown that when photos of people with fearful facial expressions — or other unsettling images such as spiders — are presented to cortically blind subjects, the amygdala fires and the fear circuitry is activated!

Equally mind-blowing is that it only takes a mere 10 millisecond (ms) of exposure to the image for the unconscious brain to register and begin to process the fear source. After just 30 ms, the conscious brain is set into motion.

If the brain can perceive a visually communicated image when the individual is without the ability to see it, just imagine what’s going on within our brains when we are inundated with negative news stories, violent video games, celebrity tabloids, office gossip, jobs we dread, and negative self talk?

So, what does this have to do with your brain being a hater, or why you’ve been playing the start-stop-start-stop game?

Nerve tissue is live tissue that acts just like an electrical cord. When you plug the cord into its power source, current begins to flow. If you plug an electrical cord into a battery, which produces direct current (DC), direct current will run through the cord. If you plug the cord into a wall outlet, which transmits alternating current (AC) from a power plant, alternating current will run through the cord. The nature of the power generated by the source determines how the current flows. (Pillay, 4)

In Pillay’s analogy, the sources are the battery and the power plant, while the resulting currents are DC and AC, respectively.

When it comes to the nerve tissue in our brains, the source is the events of the world. As soon as we are born, we are constantly exposed to events (source inputs), all of which flow into our brains, consciously or unconsciously, regardless of whether we are wide awake, daydreaming, or sound asleep. In other words, the brain is always plugged in. If the events taking place are of a fearsome nature, then a fear current will run through the nerve tissue.

Now, imagine what would happen if we were consciously aware of every single event that took place around us. We would go nuts! There would be way too much to attend to. Yet, although we cannot process it all on a conscious level, the subconscious is still taking it in. Pillay uses the example of a patient who suffered from a case of anxiety that subsided once her husband stopped watching crime shows in bed after she fell asleep. No, she wasn’t watching the shows, but because of them, her fear circuits were firing as she slept.

Now for the hater part. The amygdala is connected to the conscious brain, thus allowing signals to run between it and the more conscious get-the-job-done action centers (the cortex) that we need to move toward our goals, whether they be losing weight, being in a healthy relationship, or making more money. Just as those whom we feel we are most connected to may be our biggest haters, the close connection between the cortex and the amygdala can put our plans of lean bodies, wedding rings, and higher tax brackets on hold.

When fear is present — again, consciously or unconsciously — the amygdala fires up. Pillay writes, “this amygdala activation will spread to the cortex and disrupt the synchrony your brain needs for the cortex to organize your efforts toward the goal.”

I’m running up against my 3-page blog rule. I’ll be back with more tomorrow. But, in the meantime, consider what fears you might have — consciously or unconsciously — about getting healthier and/or losing weight.

Do you worry about what other people — friends and family, in particular — will think of your diet and lifestyle changes?

Do you worry that your significant other, who has gained quite a bit of weight him/herself, will become jealous of the new attention you receive once you achieve your goal?

Or are YOU feeling weary about all of the attention?

Are you scared to death of your next weigh-in and body-fat check with your personal trainer?

As you ponder that for the next day, I challenge you to try just one thing that will surely calm down that overreactive hater in your skull. For the next 24 hours, don’t watch any news, read any newspapers, visit any news sites, play any violent video games, read any gossip mags, or participate in any gossip yourself. Try it for one day and notice how much better you feel.

If there is one thing I have noticed about the Professional Human Beings (PHB) I spend time with, it is that they avoid all of the above, all of the time. And they get stuff done!

Check out the video below regarding this kind of input control with one of my fave PHBs, Todd Durkin.

More on this topic — including some solutions — tomorrow!

Leave a comment and let me know what you think!

This entry was posted on Wednesday, April 4th, 2012 at 2:51 pm and is filed under mind. You can follow any responses to this entry through the RSS 2.0 feed.

9 thoughts on “Fear First: How Your Brain Can Be Your Biggest Hater”