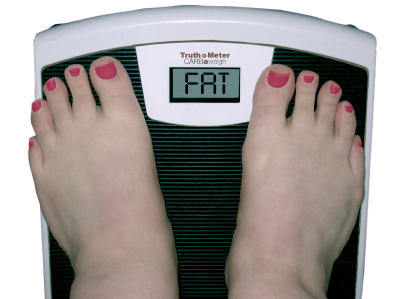 I wonder at what point will we collective realize that the calories-in/calories-out approach to weight loss is a ginormous FAIL.

Consider this for a moment. According to last Thursday’s UW Radio guest Jonathan Bailor, people who quit smoking cold turkey have a 5.5% chance of success. Meanwhile, losing fat long-term by eating less and exercising more has a success rate of 4.6%.

In other words, the odds of losing weight and keeping it off are worse than if you quit a highly-addictive substance with zero assistance, treatment, or strategy.

Good luck on that 1200-calorie diet and endless treadmill program!

In fact, both factors — the low-cal diet and chronic cardio — are sealing the deal on your eventual rebound weight gain, as they create hormonal turmoil — and malnutrition — within the body.

And fat loss has a whole LOT more to do with hormones than it has to do with calories.

That’s what Mr. Bailor — a former frustrated personal trainer like myself — found while spending ten years of his life hanging out with top researchers and reviewing over 11,000 articles and more than 10,000 pages of fat loss research.

He found the facts.

Fortunately for us, he wrote them all down in a way that just about all of us can comprehend in his mind-blowing book The Smarter Science of Slim.

If you don’t like to read much, he and I covered a ton of scientific fat loss truths during our podcast. As predicted, our conversation was what I call an Instant Classic. The man knows his stuff!

In this episode, Jonathan drops some fat-seeking truth bombs on the following topics:

* Why we should set aside the common short-term approach to fat loss in favor of long-term success.

* What the Laws of Thermodynamics say and don’t say about fat loss.

* Exactly how much muscle we lose while on calorie-restricted diets. This one will shock you!

* How a study showed that a 1600-calorie diet combined with a low-intensity walking program slowed the metabolism by 40%!

* How exercise is a relatively new phenomenon. Not long ago, women were told that exercise would make them infertile. How can we NOT be exercising enough when exercise is something that few people did only 30 hers ago? Watch the video below!

* How the fat loss industry is missing the boat on the impact of hormones on fat loss.

* Why calories matter but are irrelevant when we eat the right types of SANE foods.

* How body composition is regulated around a set point which can be lowered by eating real foods and exercising the right way.

I know! I know! I say this all the time, but this is a must-listen show. Definitely a nominee for Best Show of the Year.

Click the PLAY button below to listen to the entire episode. Or watch the video for a teaser on exercise.

Back to Real Food Summit work. It’s gonna be so cool!

Sean
I Wrote an Ebook on Fat Loss and Stuff…

This entry was posted on Wednesday, May 16th, 2012 at 2:30 pm and is filed under podcast, wellness. You can follow any responses to this entry through the RSS 2.0 feed.