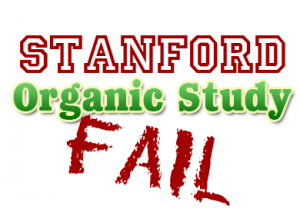 Last week I had the great pleasure of being interviewed by Abel Bascom for his popular Fat-Burning Man podcast. About thirty minutes into our conversation, Abel pitched me the most rant-inducing question he could have possibly delivered.

Abel’s query pertained to the recent study out of Stanford University concluding that organically-grown food is no more nutritious than its chemically-laden counterpart.

My answer: I don’t care.

To be perfectly honest, I hadn’t even heard of the study — very likely because I pay zero attention to what’s reported in the news, especially mainstream media reports on anything having to do with health.

I’m sure people all over the country employed this study as one ginormous gotcha moment, an opportunity to finally prove to their hippy friends that they had been wasting their hard-earned cash for apparently — and scientifically — no reason whatsoever.

In your face, hippies! Told ya so!

Well, I’m no hippy. And, yes, the nutritional value of food is important to me. But regardless of what those smart folks at Stanford may say, and what Anderson Cooper may read off of his teleprompter, I prefer my food to be poison-free. It’s really that simple.

Then again, maybe simplicity is what has gotten us into this situation. As cheap, fast, and convenient have become the primary motivators for why we buy, we have lost sight of how the foods choices we make are directly connected to our environment, an ever-worsening health crisis, and whether future generations will actually have enough fertile land to grow food on. At the same time, we must understand how these more complicated matters lead back to our wallets.

Let’s start with the pesticides themselves. In the foreword to Maria Rodale’s book Organic Manifesto: How Organic Food Can Heal Our Planet, Feed the World, and Keep Us Safe

“Pesticides are poisons. They are manufactured to kill insects, rodents, fungi, and weeds. But they can also kill people. Organophosphates — one of the most common types of pesticide — were developed in Nazi Germany to be used as chemical weapons. It was later recognized that the same sort of nerve gases formulated to attack enemy soldiers and civilians could be used against agricultural pests.”

Those who have recently turned their backs on the organic produce section for the “equally nutritious” conventional alternative have done so in favor of poisoning themselves with small daily doses of chemical weapons.

In fact, a newsletter produced by the National Institutes of Health (NIH) reported that agricultural chemicals may increase the risk of diabetes, as concluded by the Agricultural Health Study. Specifically, a link was found between diabetes and seven pesticides: aldrin, chlordane, heptachlor, dichlorvos, trichlorfom, alachlor, and cyanazine. (Rodale, 25)

I can’t even pronounce that stuff. Why would I want to eat it?

If you think organic food is expensive, you should know that people with diabetes spend $11,744 a year on health care expenses. Just think of all the poison-free organic food you could have bought with that.

I find it ironic that in our eco-aware culture in which Going Green is the mantra of so many, the topic of soil management and its impact on climate change (whether you believe in it or not) and water pollution has yet to take the forefront. Because if you’re giving your pals a hard time for melting ice caps and drowning polar bears with their gas-guzzling SUVs, you had better be eating an all-organic diet while you’re doing it. If not, you’re driving your Prius down Hypocrisy Lane, my friend.

We can debate about nutritional value until we’re blue in the face, but no discussion regarding food is complete without mentioning the soil from which it is grown. Maria Rodale writes,

“We know more about outer space than we do about the ground we live on, and about the soil that sustains us. In general we don’t think too much about soil. Frankly, it’s not sexy.”

There are two things everyone should know about soil. And in my opinion they are both dead sexy.

First off, underneath the soil are a fungi called mycorrhizal fungi that grow on the roots of plants. These particular fungi do something really cool (and sexy). They pull carbon out of the air and sequester it within the soil. Yes, the soil beneath our very feet is one ginormous carbon sink that no one seems to want to talk about for some reason.

So…what do you think happens when conventional farmers apply FUNGIcides to their crops?

You’ll hear more about these fungi once some giant company learns how to make money off of them. As we speak, there is surely some biotech lab feverishly trying to figure out how to genetically modify fungi to withstand chemical application. Just give it some time.

Coming to a teleprompter near you.

Second, the structure of healthy organic soil has an uncanny ability to hold onto water. However when soil is treated with chemicals, its structure eventually becomes weak and degraded. Like the wiped-out fungi that can no longer sequester carbon, the soil can no longer retain water. Heavy rainfalls cause water runoff, sending soil, nutrients, and chemicals (pesticides, herbicides, etc.) into the surrounding waters. Topsoil is lost. Dead zones — where the water is oxygen-starved and marine life cannot exist — are created in our oceans and lakes. Drinking water is contaminated. It’s one big mess. One that we end up paying for when the federal government spends millions — if not billions — to clean it up.

And if you’ve ever seen news reports of major flooding in the Midwest, just imagine how much less destructive the rains would be if all of that soil was organic, well-structured, and could hold onto water the way it is supposed to.

Add to that the fact that chemical farming requires synthetic fertilizers, which require large amounts of petroleum energy to produce.

I’m no overt environmentalist. You won’t catch me outside of Whole Foods asking you to sign a petition or to make a donation for cleaner air and water. No, I made my contribution to our environment when I was inside the store. I purchased organic food.

The Stanford study means nothing to me. The answer I gave to Abel was the honest truth — I don’t give one flying fork about that study.

What I care about is having clean water to drink and air to breathe, and that future generations will have access to real food made in the way that Mother Nature intended.

I’m sure she intended for it to be poison-free.

This entry was posted on Monday, September 17th, 2012 at 2:46 pm and is filed under wellness. You can follow any responses to this entry through the RSS 2.0 feed.

14 thoughts on “It’s Not About the Nutrients: The Stanford Organic Food Study”