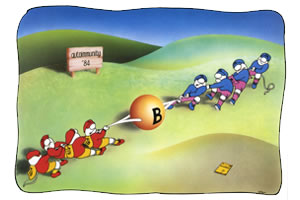 Research shows that glutathione plays a critical role in upregulating T-regulatory cells, bringing TH-1 and TH-2 back into balance and calming autoimmunity.

Speaking of research, this study published in the Journal of Pharmaceutical Science demonstrated “a significant correlation between plasma glutathione and SLE (lupus) severity exists that may aid evaluation of the disease severity and usefulness of the management of SLE”. (sources: Pubmed & Kharrazian lecture slides)

SLE, or lupus, is the most destructive of all autoimmune conditions. This study showed that those with the most severe symptoms had the lowest glutathione levels.

If its role in the activation of the T-regulatory cells, the balancing of TH-1 and TH-2, downregulation of destructive TH-17, and improved detoxification isn’t enough for you, consider this. Glutathione also reduces intestinal barrier inflammation, promotes healing of the mucosa, and contributes to healthy gut function. In other words, it helps keep the flies out, reducing or eliminating yet another autoimmune trigger.

Glutathione’s ability to enhance tissue healing is critical not only for preventing autoimmunity but also for recovery from autoimmune flare-ups. This likely explains the reduced exercise-induced muscle soreness when taking my favorite supplement (can’t say the name due to dumb company rules), which is proven by peer-reviewed research to increase glutathione by 300%.

An additional therapeutic measure for dampening autoimmunity is to increase levels of superoxide dismutase (SOD), another powerful antioxidant enzyme. Coincidentally, the discoverer of SOD is Dr. Joe McCord, the primary formulator of said supplement and winner of the 1997 Elliott Cresson medal for co-discovering the biology of free radical reactions in living organisms. That means he co-discovered the entire field of free radical biology.

This paper from The Ohio State University published in 2011 demonstrates a threefold increase in SOD activity in the supplement-treated group.

I cannot say enough about how vital and imperative it is for you to maintain healthy glutathione levels, not only for preventing or dampening autoimmunity, but also slowing down cellular aging, reducing oxidative stress, and protecting you from chronic degenerative diseases. I hope that this series of blogs has opened up your eyes to the power of this critical antioxidant enzyme.

There are 50 million people in this country with autoimmune disease. One of the most well-known is former talk show host Montel Williams, who was diagnosed with multiple sclerosis (MS) in 1999. MS develops when the immune system attacks the myelin sheaths coating the neurons in the brain. Symptoms include lack of coordination, double vision, jerky eye movements, involuntary leg movements, slurred speech, muscle weakness, and seizures.

This is not a sales pitch. I’m just sharing what I know can help millions of people boost health and fight disease. No more. No less.

That’s it for me today. It has given me much pleasure to share this life-changing information on nutrigenomics, hittin’ switches, NRF2, glutathione, and autoimmunity this past week.

Tune in tomorrow for another Inspire Millions challenge from Brett Klika and me! If you have low back pain, you won’t want to miss it!

I’m out! Keep hittin’ those switches!! ☺

This entry was posted on Tuesday, May 17th, 2011 at 12:11 pm and is filed under wellness. You can follow any responses to this entry through the RSS 2.0 feed.

12 thoughts on “The Glutathione-Autoimmune Connection! (Part 2)”