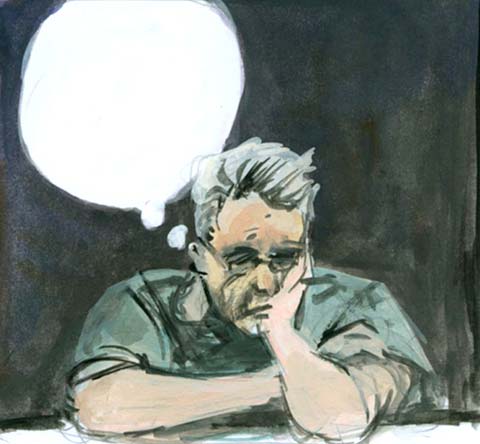 Maybe this will do the trick.

For the past week or so, I’ve woken up with every intention of writing. I’ve set aside two hours a day for it on my Google calendar. I have a list of notes and several outlines for a series of blogs about Chris Kresser’s Health Baby Code e-course. (Chris is on UW Radio tomorrow, by the way.)

I sit. I stare at the screen. Fingers on the keyboard.

This isn’t what I imagined. I thought I would finish writing The Dark Side of Fat Loss and just get back into the same routine. But life has a tendency to throw us curveballs.

I’m having a moment (a 10-day-long one) of inertia. Maybe you can call it an impasse, or a fork in the road.

One of my Facebook friends called it “project hangover”. Sounds like a trip to Vegas. But after cooping myself in my room for 4 months, staring at my iMac, and trying to string together the right words to make a complicated topic (fat loss) easy enough for everyone to understand, a hangover is actually a perfect way to describe it.

A few days ago, I got an email from my friend and writing coach Luke Shanahan congratulating me on finishing DSFL. Having written several books of his own including Deep Nutrition (with Dr. Cate Shanahan), he included the video below to describe what it’s like to finally emerge from the writing trenches.

See that guy’s head flopping all over the place? That’s how mine feels.

See him stuck on the stairs flopping around like a fish, not going anywhere? That what I’m doing.

Over the past week, I’ve started reading at least 5 books and finished none. I’m uncertain as to where I want to put my focus. Food and health are fun to study and write about, but how many ways can one guy suggest that you Just Eat Real Food, go to bed on time, reduce stress, reduce your toxic load, and exercise?

I’d rather not confuse the hell out of people with blog posts regarding how cholecalciferol increases aromatase, which perpetuates toenail fungus while increasing permeability of the left ventricle of the blood brain barrier. (Totally made that up.)

That’s not my thing.

What’s really been on my mind is a moderate shift of my attention away from matters of diet and toward those of human behavior. Because in the end, as awesome as all of this information may be, it’s not worth the screen it’s written on if the majority of its readers don’t DO it. They want to do it. They just don’t. Some would say they can’t. They try to make the changes, then they go right back on auto-pilot and sabotage it all.

Why do people (including myself) do the things they do?

That question fascinates the hell out of me. Earlier today, I recorded an email-list-only (sign up in the upper right) with Morley Robinson. If you listen to the radio show, you may know him as “my main man Morley from the 847”. During our call Morley said, “Getting people to change their religion is easier than getting them to change their diet.”

And ironically for some, diet is a religion.

Morley’s right. Most of this stuff has more to do with what’s going on between our ears than what we put into our mouths. When I ask myself “what’s next?”, my mind wanders toward the path of more effectively assisting people with the psychological component of regaining health and fitness. It’s a gaping hole in this industry, another one of those things that people seldom talk about. I imagine that makes it underground, right?

Last night, I broke out my old tattered copy of How to Win Friends and Influence People by Dale Carnegie. I think Chapter 1 should be required reading for everyone in the health blogosphere as well as the researchers and writers whose findings we blog about.

I won’t say why we should read it, since my reasoning may be misconstrued as criticism. I’ll let the author say it:

“Any fool can criticize, condemn, and complain—and most fools do. But it takes character and self-control to be understanding and forgiving.”

Respect the journey. Each of us has our own.

Anyway, I gotta get back to getting my Healthy Baby Code on. Don’t miss the show tomorrow. And be on the lookout for my How to Make Healthy Bebes! blog.

Feeling much better now, like I finally mustered up the nerve to jump in the pool. It’s cold at first. But I’m warming up.

This entry was posted on Wednesday, September 14th, 2011 at 3:59 pm and is filed under mind. You can follow any responses to this entry through the RSS 2.0 feed.

8 thoughts on “Blogger’s Block: What’s Next?”