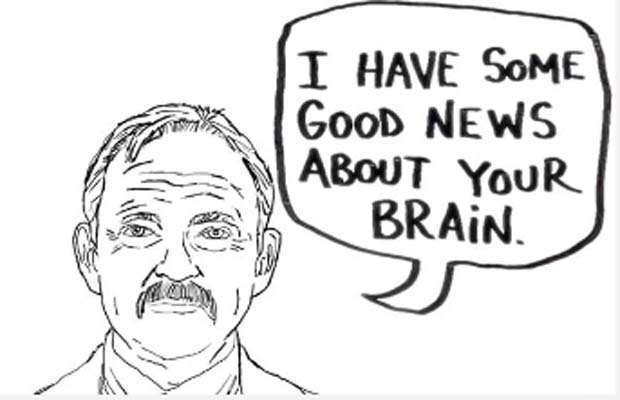 Dr. Kalish is the man.

If there is anyone who can appreciate the beauty of balancing the brain naturally, it’s me.

About 6 years ago, my own chronic anxiety and depression issues finally led me to the doctor’s office, where I literally begged for a prescription fix.

I had done some reading up on Paxil (an SSRI) and just knew that it would help me snap out of a funk.

Instead, the doc wrote me prescription for Prozac, a drug that, at the time, I had associated with “crazy folk” who were one step away from jumping off a bridge. (I know better now, of course.)

I didn’t want to be a member of Prozac Nation. I wanted my damn Paxil! It was cooler than Prozac — even the great NFL running back Ricky Williams took Paxil, and he led the league in rushing that year!

The following day, I took the leap and dropped my first Prozac down the hatch. I will NEVER forget that day.

I popped my first pill in the morning before heading to my personal training job. I didn’t really notice anything different, figuring that the effects would take a few days to kick in.

Then, during my final session of the day — fortunately my client Beth was a psychologist — I started feeling a little…weird. The colors in the room became brighter. My balance was suddenly off. And I started hyperventilating.

I couldn’t get enough air, it seemed.

Slowly shuffling over to a corner where the rest of the gym members wouldn’t see me, I took a seat on the floor, breathing deeply and trying to calm my body while under Beth’s watchful and understanding eye.

After a few minutes, I started feeling a little better. I walked outside where there was plenty of air, and I called a friend to come and pick me up. There was no way I was going to drive myself home.

I thought I was in the clear, my odd little episode had come to an end. But no sooner than 5-minutes after stepping outside, it came back. This one was worse than the first. I remember going back inside of the gym to find someone who could help me get to the on-campus Health Services building (I worked at SDSU at the time).

A hyperventilating mess, we finally made it to Health Services where I breathed into a brown bag until my symptoms subsided once again.

I had never had a panic attack in my life. Funny that it took a tiny green and white pill — intended to balance my mood — to give me my first and second on the same day.

That was the last time I ever took Prozac.

My doc was convinced. Prozac wasn’t for me.

I went home with a prescription for Paxil.

Although Paxil didn’t send me into any Prozac-like episodes, it had its own problems. My first week on the drug was interesting to say the least.

First off, my appetite was gone for the first 5 or 6 days. The only thing I could eat was Lucky Charms. Weird, I know.

As if the whole Lucky Charms thing wasn’t strange enough, my attraction to women literally took a hike. Women just weren’t women anymore. To be frank, boobs and booty just weren’t doing it for me. It was as if my “man switch” got turned off for a week. All I could do was cross my fingers and hope that it would flip back on more sooner than later.

It finally did, but not without a few sexual side effects that I won’t get into here.

Just use your imagination. 🙂

Anyway…after a week of adjusting to my new medication, I actually started to like it. Despite a bad case of the all-day yawns and this weird tingling feeling I would have upon waking, Paxil wasn’t that bad. I went from being down-in-the-dumps to being one happy dude in a matter of weeks. I literally had no emotion but happiness. I called it my Paxil Glow.

The glow actually had me going out with friends and participating in life again. It was during this time that I learned that people weren’t so bad after all, and that I actually has a personality underneath all of my shyness.

There’s a bright side to everything, I guess.

Deep down I knew that I couldn’t stay on Paxil forever. At some point, I would have to ditch the glow and figure out how I could boost my mood naturally. And to be honest, being happy all the time just isn’t as cool as it sounds. I wanted to feel real emotions again.

So, through my reading I figured out that my previous anxiety and depression issues had more to do with my low-fat diet, exercise addiction, and a poor outlook on life than anything else.

By adding more fats to my diet, cutting back on the chronic cardio, and immersing myself in personal development books, I was finally able to ditch the Paxil Glow cold turkey with zero side effects.

No, I wasn’t as uber-friendly as I was before. But those irritating yawns were gone. And all of my body parts started functioning normally again (if you know what I mean.).

Happiness no longer followed me around everywhere I went, but I was very happy to feel a little anger, sadness, and “blah” every now and then.

The reason I am telling this story is because although my experience with Paxil had its perks, it was also marred by a litany of unnecessary trials that I would have never had to experience if I had known what I know now about natural treatments for depression and anxiety.

Treatments that don’t make you have a panic attack while at work.

Treatments that won’t have you eating marshmallow rainbows for a week.

Treatments that keep all of your body parts working…

This is why Dr. Kalish is the man.

Instead of resorting to prescription drugs — riddled with side effects — as a first option, he thinks “natural first”.

Using simple urine tests, inexpensive amino acid supplements, as well as diet and lifestyle modifications, Dr. Kalish has helped thousands of people sidestep the allopathic approach to mood disorders by way of identifying and correcting specific deficiencies in the neurotransmitters serotonin and dopamine.

On last night’s episode of UW Radio, Dr. Kalish and I discussed the following topics and more:

* How a simple urine test can take a snapshot of your brain chemistry.

* How the amino acids supplements 5-HTP and L-tyrosine balance the brain by way of increasing levels of serotonin and dopamine, respectively.

* Why taking 5-HTP alone — without balancing it with l-tyrosine — can lead to dopamine deficiency, and vice-versa.

* Whether it is safe to take amino acids while on medications for depression, anxiety, or ADHD?

* Really cool cutting-edge science on OCT2 receptors and how the opening and closing of cellular gates in the brain and kidneys impact brain chemistry. ((See video below))

* The connection between your brain and gut — and how increasing serotonin via amino acids can improve gut function.

* The effect of caffeine consumption on serotonin production

* How sex hormones are tied in with brain chemicals.

* A simple way to increase the long-term efficacy of Alzheimer’s drugs.

Dr. Kalish was truth-bomb-dropping machine last night! The feedback has been off the charts. This is certainly a show you don’t want to skip.

But, hey, everything happens for a reason.

Please send this show to your friends and family who may be suffering from mood issues. Everyone deserves to know that they have options.

Click the PLAY button below to listen to Dr. Kalish’s podcast or click HERE to download the show on iTunes. And if the show leaves you thirsty for more info, click HERE to receive a FREE Treating Depression Naturally class taught by the man himself.

Sean
All of My Parts are Working Fine Now! 🙂

This entry was posted on Tuesday, April 24th, 2012 at 10:48 am and is filed under mind, podcast. You can follow any responses to this entry through the RSS 2.0 feed.