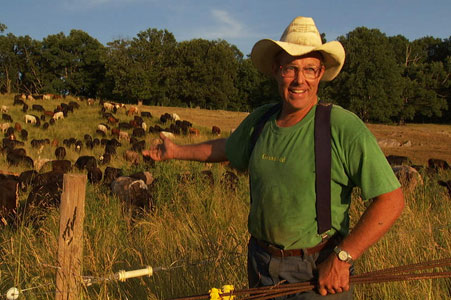 “It was the temptation of every civilization to take what nature spent thousands of years building and turn it into cash.”

The words of organic farming pioneer Sir Albert Howard (1873 – 1947) ring truer today than at any other time in the history of our planet.

In other words, we’ve really blown it.

When it comes to the destruction of the soil, the treatment and raising of animals, and our subsidized, genetically-modified, broad-scale-industrialized annual crop system…well, civilization really doesn’t seem so civilized.

The brutality inflicted upon nature in the name of profits and bottom lines has, of course, precipitated a trickle-up effect of sorts, moving from soil to plants to animals to us. And then it is we who further perpetuate the cycle by seemingly holding Mother Nature upside down by her ankles, vigorously shaking her until the last dime falls from her pockets.

Where do we go from here?

Our food supply has been through hell for the past half-century or so, but it had not always been that way. Hell only happened when man learned to convert sunlight and soil into cash crops and to turn animals into slaves.

As this tragedy has unfolded, consumers have remained in lock-step with food producers, relinquishing all connection to and appreciation for one of the most basic of all needs — the plants and animals we consume — and the soils and pastures from which they come.

We don’t even know what Real Food is anymore.

As bleak a picture as this may appear, there remain many farmers and consumers who pledge allegiance to the way things were and ought always be. These truly civilized folk recognize the symbiotic relationship among soil, plant, and animal. They refuse to trade in their health — and the health of the planet — in exchange for convenience and cheap food. They know where we’ve been, and they know where we’re going if change does not come soon.

And this is exactly why I decided to host the upcoming Real Food Summit — because the world needs a wake-up call. Because, in my opinion, it makes no sense to argue over macronutrient ratios or which trendy diet is best when most of us have no concept of what real food really is or how our food choices affect anyone or anything beyond ourselves.

I won’t evangelize any further on this one. I’ll leave all of the facts, figures, and know-how to the experts.

And I could not think of anyone better than Joel Salatin — who you may know from the movie Food Inc. or Michael Pollan’s book The Omnivore’s Dilemma — to explain what real food really is and how he manages to thrive while following nature’s laws on his Polyface farm in Swoope, VA.

In fact, on Joel’s farm, not a single seed has been planted, not a plow been used, or a bag of chemicals been purchased in over fifty years. The animals are not slaves but rather a unified team responsible for the upkeep, fertility, and production of the farm. Cows lounge on pasture, chickens spread their wings under the sun, and pigs have the freedom to express their pigness.

Exactly as it is supposed to be.

When you register for The Real Food Summit, Joel’s entire Real Food Defined presentation will be delivered to your inbox for FREE. Not only will you learn about what real food is, but you will also learn about the obstacles put in place to keep real food from reaching the commercial supermarket shelves, whether or not real food is an elitist movement, and how real food is the ONLY thing that can feed the world.

Check out the teaser below.

Yes, Mother Nature is being exploited for her money-making potential. But let us not forget whose pockets all of that cash is coming from.

It’s time to opt out of a system that thrives on exploitation and short-sightedness.

It’s well past the time we all decided to Just Eat Real Food.

This entry was posted on Monday, July 2nd, 2012 at 1:13 pm and is filed under wellness. You can follow any responses to this entry through the RSS 2.0 feed.