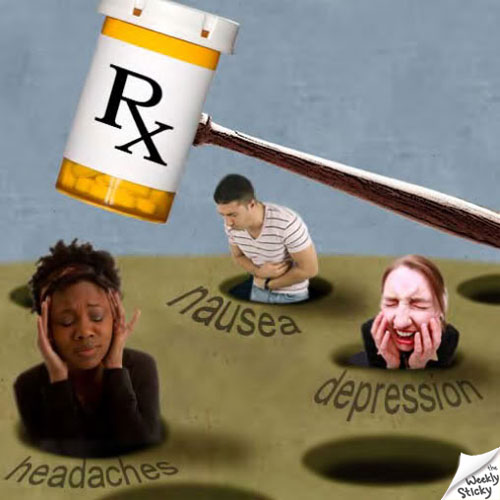 You know, the arcade game where a mole’s head pops up and it’s your job to smack it as fast as you can with a giant rubber mallet. Then as soon as you whack the mole, another pops up.

I used to love that game. I had crazy mole whacking skills back in the day.

It had been at least fifteen years (damn, I’m getting old) since I had even thought about that game. Then, a few days ago, I was reading Dr. Kalish’s new book The Kalish Method: Healing the Body, Mapping the Mind

Think about it. We go see a doctor when we’re feeling some kind of symptom, only to be prescribed a medication that in no way addresses the actual root cause of what ails us.

The medication may make us feel better for the moment, but eventually another symptom rears its ugly head and we find ourselves back at the pharmacy filling the doc’s next prescription.

And then…well, you know where this is going.

When the root cause of any symptom is left unaddressed, the problem will continue to persist regardless of how many times you smack your symptoms with the medication mallet. In fact, your health will most likely worsen.

Dr. Kalish outlines how and why Whack-a-Mole treatments for weight loss, depression, fatigue, digestive complaints, and female hormonal imbalances simply don’t work in the long term. The weight eventually comes back (and then some). The antidepressants damage healthy brain cells and deplete neurotransmitters. Hormone replacement therapy (HRT) increases the risk for a variety of different conditions including heart disease and cancer.

Of the examples Dr. Kalish gives, the one that resonated with me the most was that of medications for heartburn and acid reflux. One in twenty Americans are now taking some kind of acid blocker. Prilosec and Zantac are big business, with US sales totaling $13.9 billion a year.

Yes, these drugs block 90-percent of stomach acid production thus relieving symptoms. But since stomach acid is pretty darn important for digestion and immunity, relief may comes at a significant cost.

First off, it is the acidity of the food (chyme) leaving the stomach that flips the switches on the pancreas and gallbladder to do their jobs of breaking down nutrients in order to facilitate absorption. When stomach acid is low, absorption of vital nutrients like calcium and B12 is significantly reduced. The former may lead you down the road to osteoporosis and bone drugs. The latter leading to fatigue and antidepressants.

We must also keep in mind that it is the acidity of the stomach that acts as protection from bacteria and parasites that may be present in our food and drink. A healthy stomach is sufficiently acidic to kill these critters. But when it is in a state of drug-induced hypochlorhydria (low stomach acid), the gates are wide open for unfriendly infections. In other words, you get gut bugs which bring their own set of symptoms including constipation and/or diarrhea, gas, bloating, frequent belching, and other fun stuff. And, of course, more prescriptions.

What’s even more interesting is that it has been known for quite some time that heartburn and reflux are often symptoms of not enough acid in the stomach. This can be due to the presence of a bacterial infection called Helicobacter Pylori in the stomach. H. Pylori — which can be treated with antibiotics or more naturally with Matula Tea and lifestyle modifications — attacks the acid-producing cells lining the stomach walls. It also has been shown to be the cause of ulcers, for which these drugs are commonly prescribed.

According to David Healy, author of Pharmageddon

, GlaxoSmithKline — the maker of Zantac — has known about this bacterial connection since Australian physician Barry J. Marshall discovered it way back in 1984. Writes Healy, “Marshall made overtures to Glaxo but found they had no interest in a cure for ulcers. The beauty of H-2 (acid) blockers was that once they began taking them, many patients remained on them indefinitely.”

I assume that most of us continue to play the Whack-a-Mole medicine game because we simply don’t know of any other options. Even in the year 2012, people’s eyes still glaze over when I bring up alternative approaches like naturopathic or functional medicine, both of which aim to address the root cause(s) of symptoms not suppress them.

I can go on and on about finding the root cause. I actually wrote an entire e-book about it. But if you’d like a primer on what functional medicine is and how it can help you forever eradicate what Dr. Kalish calls The Big Five — weight gain, fatigue, depression, digestive problems, and female hormone imbalance — listen to the podcast below. The doc and I recorded it with you in mind.

Stop whacking symptoms. Find the root cause, my friends!

This entry was posted on Monday, September 10th, 2012 at 2:27 pm and is filed under podcast, wellness. You can follow any responses to this entry through the RSS 2.0 feed.

5 thoughts on “The Blog and Podcast about Whack-A-Mole Medicine.”