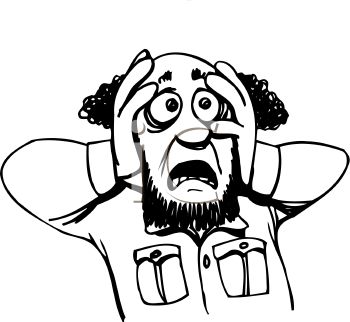 “The brain always chooses to shine the spotlight on fear above all other emotions.”

Ain’t that the truth.

As you learned yesterday, fears that we aren’t even consciously aware of can trump even our most stalwart attempts at reaching our goals. The oversensitive, fear-mongering amygdala brings to mind an anxiety-ridden driver’s ed instructor who taps his brake whenever his student approaches the speed limit.

Watch out for the pedestrians!

You’re too close to the car in front of you!

In its efforts to protect us from harm, the amygdala pumps the brakes on the action centers of the brain, known as the motor cortex. This battle between our unconscious motivations and our conscious intentions keeps us from sticking to our fat loss programs, from leaving our miserable jobs, and from earning incomes that will allow us to do the things we want in life.

No matter how badly you want to lose those 30 pounds, your brain attends to fear above all else and would rather save you from the consequences — real or imagined — of ruffling a few feathers (by changing the way you eat when with friends and family) or diverting from the path of familiarity. Sometimes, there’s nothing scarier than the unknown.

I can imagine that after reading yesterday’s post, many readers were left with a feeling of hopelessness (my bad!), likely wondering if it’s possible to overcome the amygdala’s wrath when the origins of its fear circuitry are outside of conscious awareness. How do we fix something when we don’t even know where it comes from?

Well, I’ve got good news. First off, anything is possible. In fact, throwing our arms up and calling anything impossible is a great way to further empower the amygdala. Think about it. Again, this a battle between the conscious and unconscious. When the brain gets the message that something is impossible, the action centers takes its orders — from YOU! — and surrenders. Who wins?

Dr. Pillay writes, “Just because unconscious fear is outside of awareness does not mean that we’re hopeless and cannot tap into it.”

Although you were probably told, at some point in your life, that the brain is fixed and cannot be changed, this is simply untrue. Both conscious and unconscious nerve cells can be changed by way of neuroplasticity. In other words, the brain can make new connections and associations. But it takes practice, attention, and maybe even a little help.

Pillay advocates understanding the meaning as well as the existence of our fears. Once we understand the reasons we are afraid, the conscious brain can make new connections with the subconscious and dim the lights on our fear circuits.

I can personally attest to this idea of bringing subconscious fears up to the conscious level to be worked on as a way to quell fears. Every Friday at noon, my therapist (I call him Yoda) digs some stuff out of me, regarding intimate relationships, that I didn’t even know was there! The stuff works, and I’m a much better communicator because of it.

Once the conscious mind becomes aware of our unconscious fears, the conversation in our heads goes from a monologue to a dialogue. The conscious mind can now talk back, thus deflecting the amygdala’s disruptive forces. Whenever I feel fear creep in — it never really goes away, by the way — I just say my amygdala is acting up. Simply knowing where fear comes from can be therapeutic in itself.

At the end of Chapter 1, Dr. Pillay introduces a plethora of ways to quiet the amygdala. I’ll touch on a few that stood out to me. For the rest, you gotta read the book.

Meditation and Yoga: People get hooked on this stuff for a reason. Kundalini yoga has been shown to be effective in people with obsessive compulsive disorder, as it calms the fears surrounding the consequences of what will happen if they do not perform their repetitive rituals. Transcendental meditation (you may know it as TM) increases frontal coherence in the brain, in which the the parts of the frontal lobe work together harmoniously. Frontal coherence enhances inner calmness and reduces fear. (Pillay, 33)

Attend to Positive Things: The strength of the fear emotion is what captures the amygdala. So, do your part to overwhelm it with positivity. Turn off the news! In my home, you can find positive movies like Finding Joe looping while I work. People make fun of my fixation with documentaries and flicks that have to do with triumph. Become a master of input control. Even if you have to fake a smile, your brain will learn to associate it with happiness through practice!

Impossible versus Difficult: I touched on this one earlier. Remember, the amygdala wins when you label your goals as impossible. You’re done! Replacing impossible with difficult keeps the conscious mind engaged. And don’t think that your brain is fooled when you really think your fat loss goals are impossible but you go to the gym anyway to clear your conscience. The brain knows!

Embrace your Fears: I love the idea of going to Courage Gym, something I first read about in Brian Johnson’s awesome book, The Philosopher’s Notes, and discussed with him during THIS PODCAST. Move closer to your fears with courage. Inch by inch. This reminds me of when I was a kid and I would slowly submerge myself into a swimming pool. Toes first. Then my legs. Then my body. Then I finally plunged my head underwater. I’m in! Love your fears. They’re yours, right? When you’re constantly fighting with your fears, you’re so busy fighting that you’re no longer open to the possibilities that may come to you. (I stole that line from a guy in Finding Joe, by the way.)

A few more from the doc:

* Find a safe environment where you can let yourself go, such as a therapist’s office or a journal.

That’s it for the day. Thanks for reading!

Tomorrow’s blog will be a recap of tonight’s UW Radio show with Reed Davis. Next week, we’ll tackle fear of success, things you didn’t know about magnesium, and maybe even squeeze in a Friday Fun Day workout video!

Sean
I Wrote an e-Book about Fat Loss and Stuff!

This entry was posted on Thursday, April 5th, 2012 at 3:03 pm and is filed under mind. You can follow any responses to this entry through the RSS 2.0 feed.

6 thoughts on “The Blog About Calming the Hater in Your Head and Stuff..”