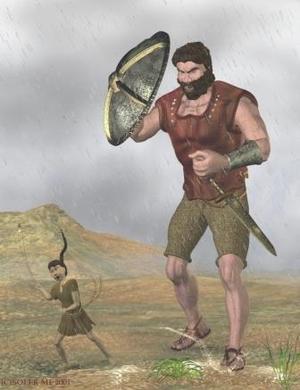 According to this SF Gate article…

“Opponents (of Prop 37), raising more than $45 million, had the backing of large agribusiness and chemical companies such as Monsanto and Dow, and food manufacturer giants, including PepsiCo. The Yes campaign raised about $6.7 million and was supported largely by the organic industry, consumer groups and alternative medicine organizations.”

While $6.7 million bucks is no small sum, Goliath can find likely find that number hidden between his oversized couch cushions. And that’s what I really want to talk about here.

A couple of months ago, while being interviewed for an online magazine, I was asked what it’s going to take to make a significant impact in how our country views food and health. My answer…

I imagine he was expecting me to say something more hippy-ish, like “we all need to come together and spread the word to the people”. Or something like that.

While I love the idea of grassroots movements, I am equally endeared with greenback support. Because let’s be honest, just one of those No on 37 commercials likely reached more people in thirty seconds than my blogs, podcasts, and videos reached all year.

And although I can understand it (because I’ve been there), the rampant poverty complex going on within our alternative health movement has to stop.

Imagine what kind of impact we would make if just a hundred of the many thousands of real food bloggers, podcasters, speakers, and consultants turned their passions into thriving six-, seven-, or eight-figure businesses. Not by scamming people out of their money, but through serving others by adding value to their lives.

I won’t hide it. My goal is to be filthy rich. I want to be the Shawn Carter (a.k.a. Jay-Z) of the health game. While Mr. Carter gets paid to make your head bob, I have no problem making your heart healthy and skinny jeans fit for a fee.

The business model is the same. My products are my albums. The blogs, podcasts, and videos are my free mix-tapes.

It’s the law of fair exchange — payment is due when products and/or services are rendered.

Bloggers, if you live in fear of your readers and followers leaving you because you asked to be paid, then you’re breaking that law.

They can call you a sellout (been there), or write you nasty emails about how health information should be free (done that), or post smear videos about you on YouTube (there now).

They’ll call you every name in the book. But you’ll also be the one called upon when a worthy cause — like labeling GMOs — needs your financial support.

How cool would it be if a hundred bloggers (at least) could each write substantial checks made out to the Non-GMO project? How much TV time would that buy? How many people would it educate?

Bill Cosby once said, “I don’t know the key to success, but the key to failure is trying to please everybody.”

Go to iTunes and read the reviews for Jay-Z’s albums. They’re not all positive — not even close. However, by using his finances to help bring basketball to Brooklyn, he has brought a ton of positivity and spirit to the borough and its businesses.

That’s what I call IMPACT. Sometimes it doesn’t come on the cheap.

If we truly want to beat Goliath, we can’t show up with a slingshot. We must level the battlefield.

I long for the day when…

I see a Joel Salatin commercial while watching The Voice.

And if those don’t get the nation’s attention, I’m not opposed to running ads with hot girls posing all naughty with organic carrots and cucumbers.

With each defeat there is a lesson to be learned. The defeat of Prop 37 has taught me that the next time around I need to do MORE. I played too small. I didn’t use my connections, voice, and online platforms as effectively as I could have and should have.

I’ll take responsibility for that. There’s no one to blame but myself.

But next time a cause this important comes around — whether in California or elsewhere — I pledge to put my money where my mouth is. And it is my greatest hope that my Real Health counterparts will have the means to do the same.

Mo’ money. There’s no way around it, peeps.

Next time, Goliath goes down.

This message has been approved by real foodies worldwide.

This entry was posted on Wednesday, November 7th, 2012 at 2:34 pm and is filed under wellness. You can follow any responses to this entry through the RSS 2.0 feed.