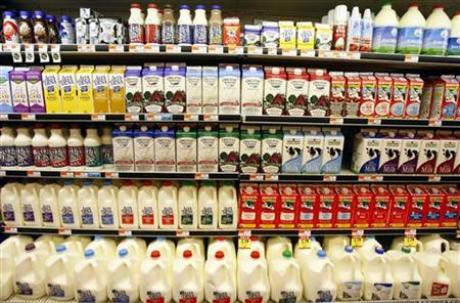 Milk and I have never been friends. Pasteurized milk, that is.

Even the tiniest glass of the white stuff is certain to give me a case of the bubble guts.

Growing up in a predominantly White community, I was intrigued by what pleasure my friends took in downing multiple cartons of the chocolate cow juice with no ill effects. I was perplexed and confused by milk’s inherent bias toward those with lighter skin; doing their bodies good while making mine feel so bad. Who knew a beverage could be so discriminative?

It just wasn’t fair. I wanted a milk moustache, too! I wanted strong bones and teeth. Just because my skin was darker didn’t mean that I needed less calcium than they did!

On occasion, I would just grit my teeth and bear it. But with each spiteful glass of dairy, the outcome never changed. I was doomed. Milk had failed me.

Fortunately, I came to find out that it wasn’t just me. In fact, most Black folks are lactose intolerant. According to Wikipedia, lactose intolerance is as low as 5% in Northern Europe, from where many of my childhood friends had descended. Yet in countries like Asia and Africa, rates can go higher than 90%.

Of course, I figured there was a genetic component to all of this. That’s obvious. But why the geographic polarity?

Today, I stumbled upon the answer while reading Deep Nutrition: Why Your Genes Need Traditional Food by Catherine Shanahan MD.

Just about all of us are born with the critical digestive enzyme lactase. When we were babies, we depended upon lactase to digest the dominant milk sugar lactose. As we grew older and weaned off of Mom’s breast, many of us lost this enzyme. But contrary to what some so strongly believe, this was never a sign that we should not consume milk from other animals. Humans have been consuming milk for over 40,000 years. If weren’t supposed to drink it, I think we would have figured that out by now.

Our ancestors consumed real milk. They never pasteurized or homogenized it. They never discarded the thick layer of brain-building cream. Nor did they feed grains, hormones, and antibiotics to their precious cattle. We do.

What I did not know about lactose intolerance was what Dr. Shanahan described on pages 155-156 regarding the impact of geographic climate on the composition and digestibility of milk. It is the process of fermentation that breaks down lactose, which is why the lactose intolerants among us don’t have issues with cheeses and yogurt. The lactase enzyme is not required.

Interestingly, fermentation occurs more rapidly in warmer climates. Therefore, my sun-dwelling African ancestors had very little need for the lactase enzyme after weaning. What we don’t use, we eventually lose as our genes flip our lactase switches to their “off” positions. In colder climates such as Northern Europe, fermentation occurred more slowly, leaving milk fresh for days. Due to their frequent exposure to lactose-containing dairy, the lactase genes stayed switched on.

Pasteurized milk and I were never meant to be friends. In hindsight, I am extremely thankful to my ancestors for wiring my genes to avoid the pus-laden bovine nectar. Without my lactose intolerance, I would have never discovered the value of real raw milk from pastured cows, the milk that we were meant to consume.

For every loss, there is a gain. I lost my lactase enzyme and gained substantial health because of it. But we’ll have to discuss raw milk on another day. Gotta finish this book! Can’t wait to get my hands on The China Study. It’s up next.

I wonder what I’ll learn.

This entry was posted on Thursday, November 11th, 2010 at 8:04 pm and is filed under wellness. You can follow any responses to this entry through the RSS 2.0 feed.

10 thoughts on “Lactose Intolerance: It Did My Body Good!”