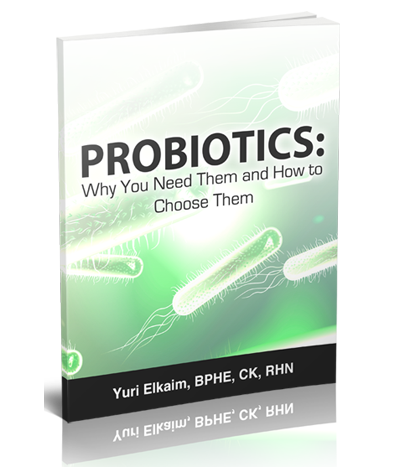 Gut flora play a key role in nutrition and your immune system.

Without these tiny helpers, your body wouldn’t be able to absorb vital nutrients or carry out its regular maintenance functions.

When your body is under attack from toxins, harmful organisms, or infection, gut flora act as the first defense against the intruders since they reside in the mucosal membranes that form the barrier between the outside world (the gut) and in the inside of your body (your bloodstream).

Since 80% of your immune function resides in the wall of the intestines – known as “gut associated lymphoid tissue” or GALT – your immune system is critically dependent upon good bacteria (probiotics) to keep the bowel wall healthy, to produce B vitamins, folic acid and vitamin K, break down your food, reduce food allergies, and fight off yeast and other invaders of the bowel.

Additionally, the cells that line your colon need energy to regenerate themselves. The gut flora helps in this process by converting unabsorbed sugars into specific types of fatty acids that your cells use for energy.

* Produce enzymes and proteins that can kill or inhibit harmful bacteria

* Stimulate the secretion of Immunoglobulin A, an antibody that fights infection

* Without a strong immune system you are more prone to infections, flu, allergies and cancer.

Bacteria are single-celled microorganisms found everywhere on Earth — in water, soil, plants, and in most parts of your body. In fact, bacteria outnumber the actual cells in your body by about 10 to 1. Your skin and digestive system alone host about 2,000 different kinds of bacteria.

There are fewer bacteria in the stomach than in other parts of the digestive system because the acidic environment kills most bacteria.

That makes delivering probiotics particularly challenging — you have to ensure that those good bacteria can survive in the stomach’s unfriendly environment.

These organisms acquired their bad reputation in the 1800s, when Louis Pasteur, the father of microbiology, showed that bacterial growth caused spoilage of foods, including milk and beer. He invented the process of heating milk to kill bacteria and mold, a process we now call pasteurization. Pasteur proposed that bacteria also cause disease in people, and the rest, as they say, is history.

Recent research has actually shown that different strains of probiotics have greatly differing influence on your immune system.

Certain strains of bacteria induce a production of regulatory T cells, which means that we get more immune system balance from them. Some improve digestion, while others help burn fat. They all play different roles and that’s why having a wide variety and high number of bacteria is best for your health.
 
Specifically, lactobacillus and bifidobacteria seem to be very helpful. We’ll investigate these 2 strains and others as we next uncover what to look for in a good probiotic supplement.

The label should disclose the genus, species, and strain designation of each probiotic strain contained in the product.

This approach provides a level of confidence that the product manufacturer is formulating the product with specific strains consistently over time. Furthermore, strain designations tie the product content back to the scientific publications that document claimed health effects.

The product label should also indicate the number of live microorganisms that are delivered in each serving or dose, as well as an expiration date. Levels are typically communicated as CFUs (colony forming units).

The suggested serving size or dose should be indicated.

Labels should describe health benefits that have been substantiated for the product.
Finally, proper storage conditions and corporate contact information (including a Web site or consumer hotline number where additional information can be obtained) should also be indicated.

Strains of the same species can be different – probiotics within the same genus (or group), such as Bifidobacterium, do not necessarily provide the same benefits.

A probiotic is defined by its:

The names sound complicated, but they are important to connecting the specific probiotic strain to the strain’s published scientific literature. Some bacteria have several strains, or variations within the same species, and the strain appears at the end of the bacteria’s formal name.

Often, product manufacturers will create a trademarked (TM) or registered trademark (®) name for the strain found in their product for marketing purposes. It is just an “alias” for the probiotic strain and does not necessarily reflect product quality.

For example, L. casei immunitas is the commercial/trademark name for the proprietary strain of Lactobacillus casei in DanActive (a popular yogurt). The real (scientific) name is Lactobacillus casei DN – 114001. Obviously, Dannon knows that the former is more appealing to consumers.

Nonetheless, the International Probiotics Assocation (IPA) says that a trademark name is not sufficient, and that the full scientific name of a strain must also appear on the product label.

Since your gut contains hundreds (if not thousands) of different types of bacteria, it’s best to find a probiotic that contains a wide variety of bacterial strains. Most probiotics will include the 2 major strains Lactobacillus acidophilus and Bifidobacteria bifidum, however, the best probiotic supplements will go above and beyond by including several more strains.

The other reason that this is important is because different bacteria adhere to different areas of the digestive and intestinal tract.

For instance, lactobacilli bacteria have an affinity for the upper GI tract, namely the alkaline medium in the small intestine. Bifidobacteria tend to favour the slightly more acidic environment of the large intestine. Thus, it’s important to get the best of both of these bacteria and numerous species and strains that they encompass.

We’ve only scratched the surfaced of the complex world of probiotics in this article and if you’d like to get the full story so that you can feel confident in the next probiotic you choose, then read this new report called “Probiotics: Why You Need Them and How to Choose Them”.

This entry was posted on Thursday, April 18th, 2013 at 8:20 pm and is filed under wellness. You can follow any responses to this entry through the RSS 2.0 feed.

3 thoughts on “How to Choose a Probiotic”