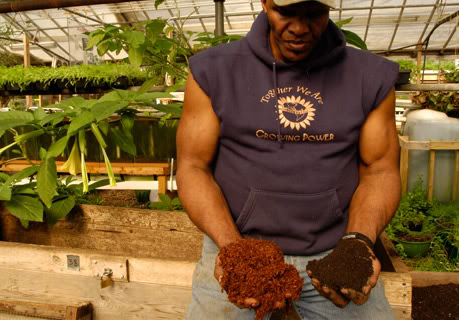 I’m actually a bit embarrassed about this one.

Tomorrow morning I’ll be hopping on a bird and flying to the great State of Georgia to speak at the Black Male Empowerment Summit at Georgia Southern University.

My presentation, entitled How to Survive College with Your Health Intact, will offer these young men simple tips and strategies for avoiding the typical health challenges — weight gain, depression, blood sugar dysregulation, and more — that students often encounter by the time they make that final walk across the stage.

But that’s not what I’m embarrassed about.

What’s had me feeling a bit ashamed over these past couple weeks, as I’ve prepared for my talk, is my complete disconnection with the history of agriculture and its impact on the Black community.

It’s been 25 years since I moved from Oakland, CA, where my neighbors and classmates were pretty much all of color, to nearby Alameda, a predominantly White community where I was one of only three Black kids in the entire school.

I’ll never forget the first day of fourth grade at Saint Philip Neri Elementary School. I sat in Mom’s Volvo station wagon crying my eyes out as I looked out into the playground trying to find a single Black face. Talk about culture shock!

Alameda is where I would call home until I left to attend San Diego State University in 1995. I probably don’t have to tell you the demographics there.

By no means are my memories of living in a Black community ones of poverty or hardship. My father was one of the best shoe salesmen Macy’s had ever seen. Mom worked for the phone company.

We lived in a two-story house with a well-kept lawn and a tall palm tree in the front yard. My brother and I had a room dedicated to toys — The Toy Room, we called it — and a swing set and basketball court out back.

Every night, we sat around the kitchen table, talked, and ate Mom’s home-cooked meals. I can even vaguely remember Mom (then again, maybe it was Dad) growing strawberries, tomatoes, and lemons in the backyard. But the vivid memories of spending many Saturdays on my hands and knees pulling weeds will never leave me.

Soon after my parents divorced, Dad hit the road and never looked back. My brother and I were two young Black kids being raised by a Mexican mother in a White community. We were mixed up, both literally and ethnically.

As I grew older, I became well aware of the fact that I was missing out on Black culture. In an attempt to make up for it, I read books like The Autobiography of Malcolm X, Soul on Ice, and Manchild in the Promised Land. I can tell you all about the Black Panthers, Fred Hamptom, and the FBI’s programs to destroy the reputations of black leaders (and more).

But one thing I couldn’t tell you about is the connection between agriculture and the current state of the black community. It never clicked. That is, until now.

I have Will Allen — an urban farmer based in Milwaukee, WI — and his book The Good Food Revolution to thank for that.

What’s Race Got to Do With It?

I’m sure many of my readers are wondering what race has to do with it. We live in a time when a Black family lives in the White House. Haven’t we moved beyond race?

In some ways we have, and in others we have not. Yes, we have come a long way in terms of race relations, but all is not well and not everyone is healthy.

Although we as Americans have a right to choose, many of us are running low on options, especially when it comes to our food supply. This fact is no more evident than within this nation’s Black communities where it is easier and much cheaper to purchase a Hostess apple pie than an actual apple, where the closest supermarket is 20 minutes away but the convenience store is on the next corner, and where the food is almost always fast.

In his book Will Allen quotes his good friend Sharon Adams as saying, “Any time you live in an area where you don’t have healthy choices, you don’t have a healthy community.”

Modern disease has run rampant amongst all races, but lack of healthy choices has hit the Black community hardest of them all. It is said that one in every two Black babies born in the year 2000 will be diagnosed with diabetes at some point in his or her life. The odds are 1 in 3 for babies of all other races. Four out of ten Black men and women over the age of twenty have high blood pressure. And Blacks are thirty-percent more likely to die young from heart disease than Whites. (Allen, 7)

Race has a lot do with it.

Lack of access to healthy food has a lot do with it.

Unfortunately, not much is being done about it.

What never quite struck me until now is that it has only been 3-4 generations since Blacks were agriculturalists. Our ancestors worked in the fields where they grew and harvested asparagus, collards, parsnips, watermelon, and more. Not only did they grow these foods, but they also knew how to prepare them. Farming and cooking techniques were passed down through the generations. Through their knowledge and experience with managing soil and thus the production and preparation of nutritious foods, Black men and women were able to maintain their physical health.

And then it stopped.

This country’s agricultural system was built on the blood, sweat, and tears of Black slaves and sharecroppers. With the Emancipation Proclamation came uncertainty amongst the freed slaves. Allen writes, “…some were said to have walked to the entrance of their plantations only to turn directly around and come back.”

In theory the sharecropping system seems far more appealing than slavery. However, sharecroppers often had to borrow money from their landowners at the beginning of each growing season. Once the harvested crops were eventually sold at market, there was little, if anything, left of the sharecropper’s split. Season after season, many found themselves in worse debt than when they started.

The breaking point occurred when the Great Depression drove crop prices way down. Sharecropping was no longer worth the trouble. Southern Blacks packed their bags and hopped aboard segregated trains to the North in hope of new opportunities.

It is said that over six million men and women took part in The Black Migration. Most simply wanted to put the hardships of slavery and sharecropping behind them. In so doing, a long history of self-sufficiency and survival through agriculture was lost. Life on the plantation was, for many, a source of shame. Gone was the pride of living off the land. Thus began a community’s dependence on a food system that reflects everything that has gone wrong with agriculture since.

Stay tuned for Part 2 next week. We’ll discuss how Will Allen has brought agriculture back into the inner cities. It’s an inspiring story.

Hate to leave you hanging, but I have to get ready for tonight’s FREE webinar on adrenal dysfunction. It’s at 5pm PT/8pm ET. If you haven’t registered click HERE! Or come back to this blog Monday to watch the recording.

This entry was posted on Thursday, September 27th, 2012 at 3:55 pm and is filed under wellness. You can follow any responses to this entry through the RSS 2.0 feed.

4 thoughts on “From Slavery to Sharecropping to Sickness. (Part 1 of 2)”