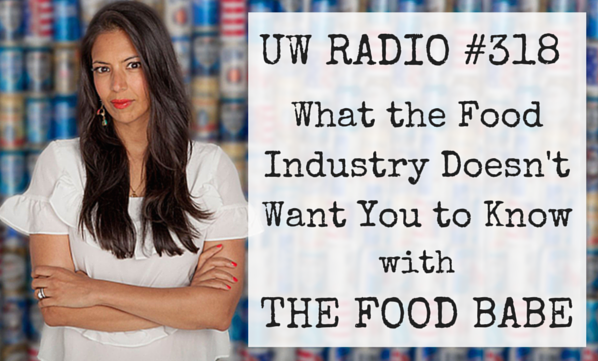 Last Tuesday I woke up to an unfortunate email.

It was from my friend Vani Hari. You may know her as The Food Babe.

Reading what she wrote, I could feel her frustration.

On the morning of the release of her new book The Food Babe Way, a project she had spent the past year pouring her heart into, she was met with dozens of 1-star Amazon reviews bashing her book … and her mission.

In her email, Vani was asking those of us who had received advanced copies of her book to post our reviews in order to counter the disparaging comments posted so far that morning. But only if we had actually read the book, of course.

I’ll be honest, I’m not a fan of Amazon reviews.

I find it odd that authors in the health and wellness space always seem to have hundreds of 5-star reviews even before the reviewer has a chance to read the book. It’s all a big scheme to artificially push books up the Amazon charts.

And that’s why I was pleased to read that Vani only wanted those of us who had actually read her book to review it.

Personally, I hadn’t had a chance to read her book when her email came in. But the next day (last Wednesday) I knocked all 300-something pages out in a day. Then I wrote up my questions in preparation for our podcast recording.

I’ll admit, as much as I love The Food Babe, there are a few things that don’t sit well with me.

I get it, creating change by bringing attention to what’s in our food supply is a step in the right direction. However, sometimes I feel like it is change by coercion rather than by education. (I ask her about this during our interview.)

After reading Vani’s book, I spent some time reading articles and blog posts written by her critics, including food science professors and student association.

I found many of their points valid…

No, The Food Babe does not have a background in biochemistry, human metabolism, or food processing.

Yes, she has been wrong about a few things. But so have I.

On many occasions, in fact.

I guess my main gripe is that, as someone who has seen so much change spawned by our online health movement, I want nothing more than to protect its integrity.

Because all it takes is one scientifically-flawed petition, signed by tens (and sometimes hundreds) of thousands of concerned citizens and covered by the mass media, to send us 5 steps back.

Is The Food Babe a scammer? A profiteer? A fear monger?

I think she’s brave, honestly concerned, and a highly effective promoter of change to our food supply.

In Indian, her name, Vani, means “voice”. I don’t think that’s a coincidence.

Last Friday, Vani and I got together to discuss many of the qualms that I and her critics have with her approach and how we can maintain the integrity of the real food movement well into the future.

Click the PLAY button below to listen to today’s interview.

I’d love to hear your feedback. Leave a comment below with your thoughts. Thanks!

And stay tuned for Friday’s episode with Missing Microbes author, Dr. Martin Blaser. We recorded it this morning. It was so awesome I couldn’t help but do a little dance for my assistant after the doc and I finished recording. 🙂

This entry was posted on Wednesday, February 18th, 2015 at 3:02 pm and is filed under podcast, wellness. You can follow any responses to this entry through the RSS 2.0 feed.